More memories from the Class of ’69 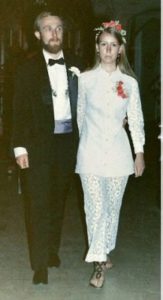 After graduating from Durham having studied Geology, Peter Davenport moved to Canada in 1970 where he obtained a PhD in Geochemistry from Queen’s University, Ontario. Francesca (Fanny) Warner, studied English at Durham and went on to gain a B.Mus in bassoon performance from Memorial University of Newfoundland.

Peter was senior Geochemist with the Newfoundland Geological Survey, and an adjunct Professor at Memorial University, later moving to the Geological Survey of Canada in Calgary as a geoscience data expert. 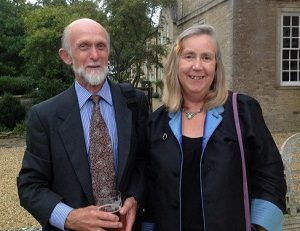 Francesca became a professional musician playing and teaching bassoon and recorder. She was principal bassoonist in the Newfoundland Symphony Orchestra for 25 years, and played in the Calgary Philharmonic and the National Ballet of Canada touring orchestra as well as many chamber groups. As Professor of woodwind techniques and bassoon performance she taught at Memorial University, University of Calgary and the University of Lethbridge. She is a certified teacher and woodwind examiner for the Royal conservatory of music in Toronto.

Married in 1970, they are still happily together, and enjoying retirement living within sight of the Rocky Mountains. 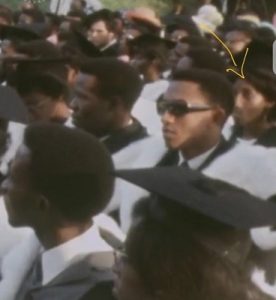 “I earned my B.A. in English, Philosophy and French from Durham University in 1969. I was among 151 graduates (see photo) receiving degrees from Durham University that year in a historic ceremony for the last Durham Congregation in Fourah Bay College, after ninety years of affiliation between the two institutions. Next, I obtained a Post-graduate Diploma in Education (DipEd) from the University of Sierra Leone, then pursued graduate studies in French as a Foreign Language (FLE) in CIEP, Sèvres, France. With my background in education, I embarked on a teaching career. Unlike my mother who was a high school teacher, my subject areas and the age groups I taught varied greatly.

I felt true pleasure serving in these different capacities – Senior Teacher at the Sierra Leone Grammar School (the first secondary school in sub-Saharan Africa), Senior Lecturer at the then Milton Margai Teacher Training College, French Teacher at the Alliance Française and Examiner for the West African Examinations Council. I have also worked as Pedagogical Adviser at the Centre Pédagogique Franco-Sierra Léonais developing curricula for schools. After spending years in the education field, it was now time for a change. I obtained an IT Certification from South Thames College, UK and volunteered with nonprofit organisations in London – The Prince’s Youth Trust, Results UK and African Rights.

For nearly ten years I worked for the United Nations Office for the Coordination of Humanitarian Affairs (UN OCHA), taking me to environments of conflicts, complex emergencies and natural disasters. I must say that experience has been really valuable and rewarding. This job involved inter-agency coordination of international humanitarian operations and ensuring that effective assistance reached millions of humanitarian beneficiaries. I served as Humanitarian Affairs Officer in OCHA country offices in Sudan, Kenya, Eritrea, as Surge Capacity Desk Officer in Geneva and as OCHA Head-of-Office in Guinea. I enjoyed reporting on humanitarian developments in each country, coordinating the production of strategic fundraising documents and monitoring donor contributions.

After retirement from the UN, I earned a Master of Arts Degree in French Literature from Montclair State University, USA in 2013. Now, I am an independent consultant, I serve on the Staff Parish Relations Committee and Communications Committee of the Princeton United Methodist Church and volunteer with AARP. I have been married for forty-six years to my husband Edward and we have two sons Edward and Gary, a daughter Chantal and three grandchildren, Kaelen, Keiran and Elise. Traveling abroad is important to me and I’ve been lucky to visit many countries in Europe, Middle East, Africa, North and South America.”

Thank you to all our alumni celebrating the 50th anniversary of their graduation for sharing their memories. Read more memories from the Class of ’69